Leo Tolstoy is a great Russian writer, who lived to see his creation be favorably recognized by the public. He was born in August 28, 1828 in the province of Tula. It was in 1847 when he starting writing novels. During his life he traveled a lot and tried various occupations, but being a writer agreed to him most. Tolstoy’s oeuvre paved the way to a new stage of development in both Russian and world’s realism. His works are adored by thousands of people in Russia and far beyond its border that is no surprise as his novels would ring in everyone. Thanks to his work, Tolstoy will be remembered for a long time.

The state Museum of Leo Tolstoy is a complex of museums related to the great Russian writer. There are unique collections of manuscripts, but one may also find original graphics and documents, revealing writer’s life and career.

1. The State Museum of Leo Tolstoy is one of the oldest literary museums of Russia. The idea to establish a museum appeared when the great elderly man left Yasnaya Polyana and that waved in Russian society which was further shocked by his death at the Astapovo station on November 7, 1910 . The tragic events have raised the interest in the writer’s personality and his literary heritage. Tolstoy’s contemporaries tried to collect and save all the things related to him. There was a need in a pivot that could unify the collective work. That basis was the Tolstoy’s Museum. Its foundation was a voluntary donation, its collection consists in the gifts of the Tolstoy’s relatives and protagonists: the writer’s manuscripts, portraits, photographs, personal belongings, books, paintings and illustrations.

The main literary exposition dedicated to Tolstoy’s life and work is located in the house built in 1817. andbased on the project of the famous architect A. Grigorev. The house was the former Lopukhins-Stanitskoy’s mansion. This is a wooden plastered building, an architectural monument of the first quarter of the XIX century that represents a unique example of post-construction Moscow: the suite of state rooms with shades painting, white columns and bas-reliefs on the facade. In addition to that, the composition of the house, an outbuilding and a small yard make a good example of an urban homestead.

The State Museum of Leo Tolstoy’s collection is tremendous. It combines around 550 000 exhibits. These are plenty of Tolstoy’s manuscripts, paintings and sculptures, graphics and many other equally interesting exponents. Thousands of negatives of his image as well as a large number of books with almost all his novels both in Russian and foreign languages were discovered. The museum shows books about Tolstoy and the people that surrounded him and there are more than 4500 personal things that he or his relatives owned.

The museum organizes a variety of tours that imply the following idea: a multidimensional language (i.e. music, slide series and video broadcasting) of a tour is to convey the idea of creative, moral and religious search Leo Tolstoy was through, to show its cohesion with the spiritual search of the ancient and modern thinkers and philosophers. 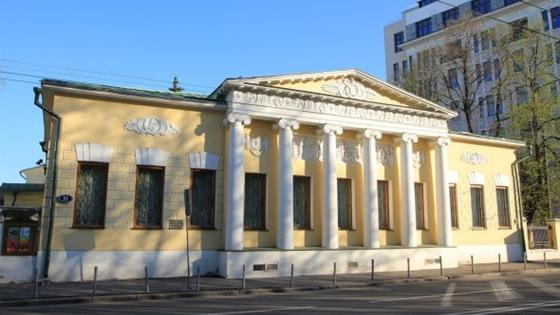 2. Tolstoy Center on Pyatnitskaya street, 12 is a branch of the museum, major thematic and stock exhibitions from the collections of the museum as well as children’s museum programs, evening meetings with cultural figures, concerts and performances are conducted here.

Leo Tolstoy lived in the house in Khamovniki with his family from 1882 to 1901. In accordance with the wish of Sophia Alexandrovna, the Tolstoy family stayed in Moscow in winters, but would move to the Yasnaya Polyana estate for summer. The house saw the cream of Russian culture as Repin, Serov, Korolenko, Chekhov, Gorky, Rachmaninoff, Chaliapin, Scriabin and other eminent people payed visits to the Tolstoys in their house in Hamovniki.

However, the value of the estate is not only about the fact that one of the greatest Russian writers lived there, it is also about 5,000 things of his and his family’s belongings and about the atmosphere accurately recreating the Tolstoys’ lifestyle. This manor has an amazing destiny: the house with its premises and even the fence around the Khamovniki’s homestead is invaluable in the historical sense. There are practically no such wooden buildings in Moscow!

Moreover, there is a garden with famous trees next to the house, which saw a lot during their lifetime. And so far every spring and summer the visitors enjoy their peace and energetics.