The turn of the XIX and the XX centuries witnessed the rebirth of Russian poetry, which was later called its Silver Age. Balmont and Sologub, Bryusov and Blok, Gumilev, Akhmatova, Mandelstam, Voloshin, Tsvetaeva, Severyanin, Yesenin, Mayakovsky and other famous poets have written their best pieces of poetry during that period.

Silver Age is a legendary and unique phenomenon in Russian literature, it is called “Russian Renaissance”. Moreover, it is one of the most dramatic periods in the history of Russian culture. A rapid process of rethinking aesthetic and philosophical ideas occurred during two or three decades, in a very short period. It is amazing how intensive the creative endeavor of artists, writers, poets, philosophers, musicians and actors was. The tremendous enthusiasm and passion beget vivid works marked by courage of thought and depth of feeling.

Silver Age resembles a full- length play whose scenario unfolds in literary cafes and haunts as well as in Moscow streets, private apartments and publishing houses, in Polytechnical Museum and Literary house etc. The chronology of Silver Age is very diverse and colorful, there are a lot of places scattered around Moscow famous for events, connected with the well- known poets and centennial myths that encurtains the places. Take a guided tour to walk a certain route allowing to reveal some of the secrets in the great poets’ life and work.

The duration of a tour is from 2 hours.

A nice addition to the walking tour will be a visit of the Silver Age poets’ museum or apartments:

1. Museum of Silver Age. In 1910 a merchant shoemaker I.Baev converted a wooden two-storey mansion into a house in the “Northern Art Nouveau” style. The architect I. Chagin contributed to the construction. In the same summer poet V.Bryusov rented an apartment on the ground floor by the landlord Baev, and the Muscovites began to call the mansion the “Bryusov’s House”, despite the fact that the house had never belonged to Bryusov.

The Museum of Silver Age (Bryusov’s House) arranges general and thematic tours, lectures and interactive sessions. They tell about the period in Russian culture within three decades from late XIX to the early XX centuries and life in literature of one of the key representatives of that era, V. Bryusov. The general tour shows Bryusov’s room as it was in 1910, which is on the mansion’s first floor and the unique literary exposition the only one in Russia that is devoted to all styles, trends and directions of Silver Age, located on the second floor.

2. Cultural Center “House-Museum of Marina Tsvetaeva.” Borisoglebsky Lane, 6 is a small two-storey mansion in the style of Moscow classicism, located not far from noisy and dusty Novy Arbat Street. There are dozens buildings like that in Moscow, but this place is special. In September 1914, one of the apartments was rented by Marina, her husband Sergei Efron and their daughter Ariadne to experience here the happiest and at the same time bitterest moments of their lives.

The house, whose rooms were occupied by the poet’s family, is truly amazing and has an extraordinary spirit that could not have been destroyed either by hunger, revolution, war, or the Red Terror. Each room (the living room with a skylight, the “Attic” and others) in the memorial apartment has its own unique character.

The museum affords the visitors to attend general tours, literary and musical concerts and poetry readings.

3. Moscow State Museum of S. A. Yesenin. The museum exhibition devoted to life and work of the most widely read Russian poet in the world (according to the official recognition made by UNESCO), was established on a voluntary basis and presented to the city, to which the poet declared love in many of his poems.

With an unusual artistic design, the museum’s exhibition obtained the atmosphere in which Poetry was born. The expositions are focused on S.Yesenin’s Moscow period of life and work. Moreover, one can track the creative life the poet lead. There is a general tour in the museum that unfolds all Yesenin’s career. There is a conducted tour, which covers the entire career of the poet. The emphasis is made on the Moscow period of his work (1912 – 1915), however, the St.Petersburg period (1915 – 1918), the years of cooperation with the Imagists (1918 – 1921), and the great lyrist’s “Boldino Autumn” – the Caucasus period of work are also extensively covered by the exposure. Within the tour the visitors will be afforded to see photographs and original things belonged to the poet, listen to the recordings with the poetry read by S.Yesenin and even to watch rare newsreel of the early XX century.

There are audio guides in Russian, English and German. The museum arranges literary evenings and concerts.

4. Moscow State Museum of V. V. Mayakovsky (closed for renovation). The Mayakovsky’s Museum in Moscow does not look like other museums: its facade is made in postmodern style. Inside the museum there are very unusual decorations made in a vivid and narrative style that corresponds to the spirit of the poet’s extraordinary oeuvre. On passing through the museum’s floors and halls, the visitor acquires the feeling of being not just a spectator, but a participant and co-author of the unfolding action, recreating a model of life and inner world of Mayakovsky. There are no glass windows, where one can observe the exhibits as in other museums. The museum’s space looks like Maze of life, which center is the memorial room, the so-called “little boat- room”, where the poet’s life was cut off. The museum’s exposition allows a visitor to have a different look at the personality of Mayakovsky, learn more about the turbulent age the poet lived and worked at.

Apart for research work and expositions the museum holds recitals with poets, actors, artists and writers. There is a cinema in the museum where you can watch films with the participation of Mayakovsky himself. The unusual design of the museum and a vivid spirit of that contradictory age make the museum a unique one. Thus, the ultimate experience derived from visiting this place stay for many years.

5. The Memorial Apartment of Andrew Bely. It is the only museum in the world dedicated to Andrei Bely – (whose real name is Boris Nikolaevich Bugaev; 1880-1934), a poet, a writer, a philosopher and a theorist of symbolism and a mystic-anthroposophist. The museum offers its visitors a chance to experience the atmosphere of the first three decades of the twentieth century, to get acquainted with the biography and oeuvre of one of the most prominent representatives of Silver Age. The museum is located in the house # 55 on the corner of the Arbat Street and Denezhny Lane, in an apartment on the third floor. Andrew Bely was born in this apartment. It is associated with his first conscious memories, childhood memories about the world, people and himself. The poet spent his study years here, experienced the first excitement of passion and grief of loss when his father passed away. Here a boy raised in a professor’s family, Boris Bugaev, grew into a modernist writer, leader of the Moscow symbolists, Andrew Bely. He had lived in this apartment for twenty-six years – since birth until 1906.

The museum conducts general tours, where the visitors may observe unique memorial things and autographs of Andrew Bely, his mythical schemes and drawings as well as books, portraits and photographs. The visitors of the museum will find a fascinating story of the symbolist writer’s, philosopher’s and mystic’s life and work, whose contribution to the Russian culture of the twentieth century can hardly be overestimated. It also tells about his dramatic relationship with Alexander Blok, overseas trips and Soviet Russia life. 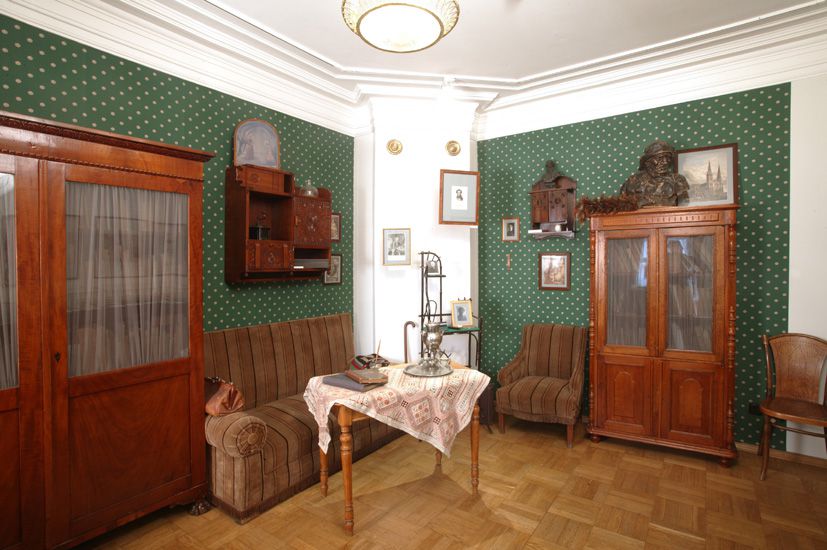 6. House-Museum of Boris Pasternak (Peredelkino, 20 km from Moscow). The Moscow- area village Peredelkino is closely associated with the poet Boris Pasternak (1890-1960). He had lived here since 1936, first occupying a large country house, and then in 1939 moved to a smaller house, where he lived until his death. On October 23, 1958 in that house Pasternak learned that he was awarded the Nobel Prize for Literature “for his outstanding achievements in contemporary lyrical poetry and in the traditional field of the great Russian prose”. World fame was followed by the fierce harassment in the USSR. He had no other choice but to reject form the Prize.

This house is alive one. Here one may listen to the works of the poet and the music he loved. You would find out a lot about life of Boris Pasternak and the house’s inhabitants, you would feel its atmosphere. It seems sometimes that the poet has just went out for a while …